FILIPINO indie musicians have it more difficult than their mainstream counterparts. They travel to great lengths both figuratively and literally just to be able to play. They get paid little, if at all, and oftentimes even refuse the little honorarium offered to them because most of them do it for the joy of playing music.

Indie musicians patiently wait their turn through a lineup of bands to be able to play anywhere from just 3-5 of their original songs, even. They lug their gear and equipment, sometimes through hours and kilometers to perform in an accessible venue with a good sound system, a cooperative and helpful sound man, and an appreciative crowd all in the pursuit of that elusive “perfect” performance. Thus, music venues are of primary importance to musicians.

IDB, a combined rehearsal studio, sound equipment rental, and bar is located on the third floor of Richland Commercial bldg. along Sucat and in front of Jaka Plaza in Brgy. San Isidro, Sucat, Parañaque. Although IDB is easy to miss, the gig entrance being small side entrance of Richland Commercial Bldg., it is now one of the happeningest place in the South, the equivalent of Makati’s Saguijo but without the relic feel and the pretentious hipster crowd.

Here’s the scoop on how IDB started.

Home is Where the Music Is

Sharen de Guzman, proprietor of IDB and rhythm guitarist of long-time indie/shoegaze/post-rock band Legarda and new super group The Skeleton Years, explained how he was inspired to put up a music venue. “It all started as a hobby really. We’ve been in the music scene for more than a decade now, and we know that gigs in the South are a bit limited due to the fact that there are only a few places that hold these kinds of events. Being in a band from the South that has to travel to northern parts of Metro Manila like Cubao or Timog Avenue, just to play, we’ve decided to open up our very own place that we musicians from the Metro South can call home.”
Sharen was very humble about the contributions of IDB when he said, “IDB is just your regular hangout spot but with some awesome music, great company, and overall great environment”. IDB continues to be one of the most accommodating places in the southern part of Metro Manila for bands and performers alike. Anyone who is anyone in the independent music scene who wants to hone their musical chops and get a boost in crowd support has to play in IDB. 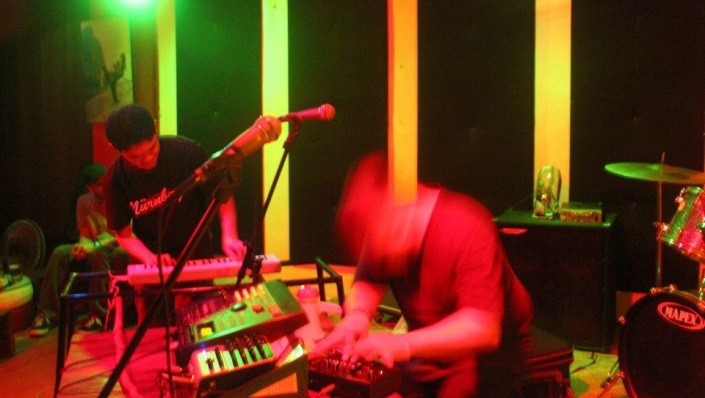 With its mix of quirky, gothic, and artistic interiors, including a wall-sized picture of Darth Vader’s head as a mural, a pencil rendition of a skull with a tentacle in one eye, a colorful wall of aliens and whimsical monsters, low tables, and even some old car tires turned into seats and tables, how could IDB not feel relaxing and cozy?
Sharen stressed that IDB’s ambience is one of its unique features and selling points as a live music venue when he said, “A lot of people who’ve been to IDB say that our place has this relaxed and homey feel to it. Chill lang daw, kahit nga daw nakaupo ka lang sa sahig, okay na e [It’s a chill place, they don’t even mind sitting on the floor to enjoy the show]. Also, the crowd can mosh (a style of dancing in rock shows) if they want to, which other venues do not allow. There are also these bands that say that IDB is like their home now.”

This hobby-turned-business has been running for three straight years now, promoting and giving actual performance opportunities to such non-mainstream but notable bands that push the envelope of Pinoy music, from electronic acts like Gentle Universe, a trio from Cavite specializing in ambient, ear-friendly, instrumental music; Cerumentric, an edgy synthrock band that uses computerized instruments instead of traditional guitars and drums; Names Are for Tombstones (NAFT), a one-man darkwave/synthpop band. It is a favorite venue of indie crowd darlings such as Walk Me Home, Neverdie, Pinstriped Rebels, Cebu’s raging girl-fronted outfit Tiger Pussy, The Sleepyheads, and acoustic-garage rock warblers Death To Puberty.

IDB has taken on a non-discriminatory and welcoming approach to organizers and bands alike, encouraging new musical styles to be performed where other typical venues won’t allow it. While it has welcomed mainstays and music veterans like The Youth, and Alfie Mela of acclaimed Pinoy new wave group Half Life Half Death, among others, it has also opened its arms to touring foreign acts, cover bands, fresh college bands, experimental musicians, and even new bands who are still exploring and developing their unique sound. IDB has had its share of being a venue of choice for touring foreign indie bands, such as when Grand Hotel Paradox, an acclaimed band from Dubai, played in the country. It has also hosted interesting events like flip top competitions. ‘Fliptop’ involves two spontaneous rap performers who try to outdo and tell off each other using rhymed speech, similar to the traditional art of balagtasan but delivered in sync to a hiphop beat. The recent one resulted to a fully packed and standing room only venue.

Since Sharen is a musician as well, he invested in a good sound system and soundproofed the venue himself. He is known to be hands-on and personal when he deals with the bands. He is also right in on the case when there are technical problems with the sound system.

One of a Kind

Before IDB, there was Al’s Bar along Aguirre Avenue in BF Homes, another venue for great music and good food where you can just chill with your friends and colleagues. For good or bad, when Al’s Bar closed, its regular patrons were displaced, and were looking for an alternative place to go. Luckily, IDB was there to take up the slack. Sharen was very candid about IDB’s potential competition when he said, “We don’t particularly have competition in our area to worry about, partly because there are really very few gig spots here in Paranaque to start with.”

When asked about his challenges in running IDB, since the venue operates as a small enterprise, Sharen answered, “We only have small crowds and we’re basically only open during the weekends”. He added, “One challenge for us is to fill up all the Saturdays and Fridays of every month. We need all the gigs we can get.” In light of this, it is probably no exaggeration to say that many gig places are a dime a dozen. IDB though, is a gem among gig places, and in its own small way has promoted Filipino music, creativity, and artistry. Unfortunately, places like these get little assistance from the government. Gig organizers may also be uninformed about the type of assistance they can ask from the government. Either way, there is a gap that needs to be filled.

When asked about his plans for IDB, Sharen shared, “Nothing specific really. We just want to continue what we’ve started and just provide a place for bands to call their home, here in the South. He also understands that much of what he has achieved was because of the wellspring of support from the indie music scene when he said, “And if it weren’t for all the support we get from them, none of this would be possible”.
And when asked what insights and tips he can share with would-be entrepreneurs, he offered, “Just persevere and do what makes you happy”. We hope and pray that IDB gets more supporters so that it can do what it has always been doing: inspire more musicians, enrich music and culture, and create an audience that will appreciate it, while sustaining itself on the business side of things.

For event reservations and live gig updates, IDB can be reached at 09228678938. Visit IDB on Facebook: http://facebook.com/idbsouth