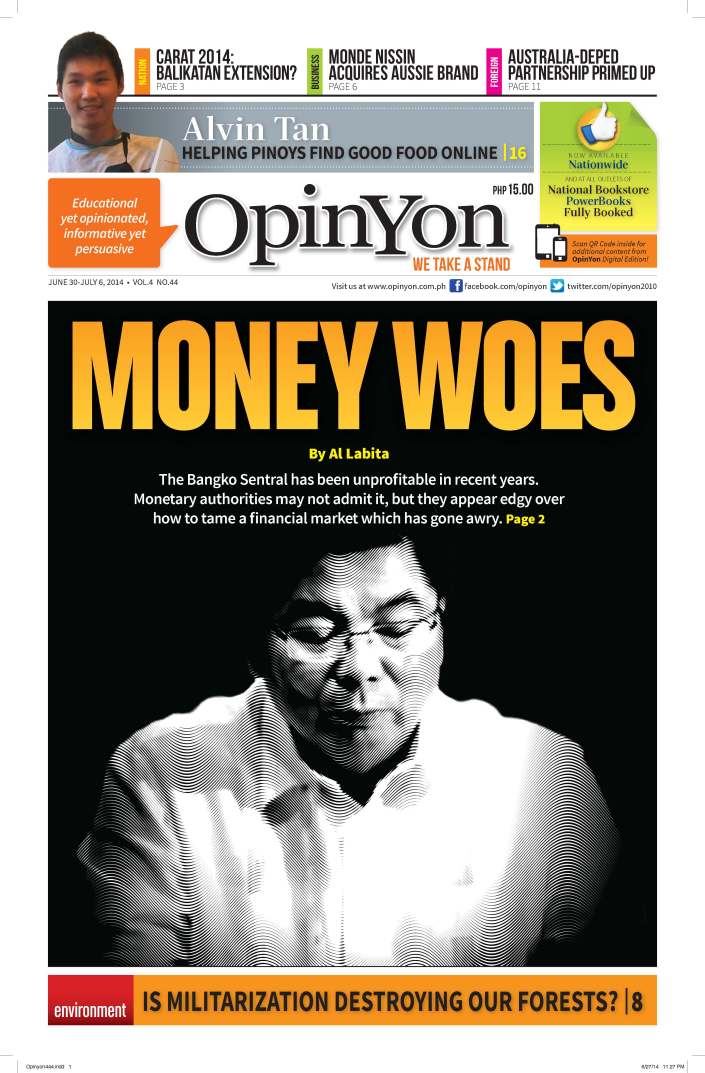 Monetary authorities may not admit it, but they appear edgy over how to tame a financial market which has gone awry.

Inflation, which measures the nation’s economic health, has surged to 4.5% in May, the fastest since November 2011.
Inflation, a key component in formulating monetary policy, was seen averaging 4.3 percent this year and by 3.4 percent for next year.

That, in turn, raised a red flag on whether it would trigger a rise in interest rates as they affect business transactions.
And as many expected, the Bangko Sentral Ng Pilipinas (BSP) turned to so-called special drawing rights (SDRs), jacking up the interest rates it pays to depositors from two to 2.25 percent per annum.

As everyone knows, SDRs are where the rich and the famous park their excess funds amounting to billions and get paid for it.

Risks to instability
This was meant to mop up excess liquidity in the system by making the SDRs attractive to depositors.
Usually, funds invested in SDAs are effectively taken out of the system and kept in the vaults of the central bank.

No matter the hefty costs SDAs carry, the BSP was willing to absorb rather than risk instability in an economy that has proven weaker than expected in the first three months.

BSP data showed that total deposits in the special facility, which at their peak were more than P2 trillion early last year, retreated to just P1.2 trillion as of mid-May this year.

At the current level of deposits, the BSP’s interest payables to depositors total around P27 billion, a big number seen to grow even bigger as the central bank endeavors to attract more funds to its vaults.

Interest-driven
The BSP has been unprofitable as a government corporation for four consecutive years already, owing to its huge SDA-driven interest expenses, based on records.

In 2012, for instance, the BSP incurred a net loss of P95.38 billion. This improved to a net loss of only P24.26 billion the following year, when it adopted measures that encouraged SDA depositors to make placements elsewhere, reducing the central bank’s interest expenses in the process.

Because the central bank’s mandate to keep prices stable costs a lot of money to pursue, the monetary authorities seek appropriate amendments to its charter that would allow the national government to raise its paid-up capital contribution to Php150 billion.

Analysts lauded the BSP for its decision raising SDA’s rates despite the heavy costs it entails on its finances.
They say the hike was a commendable move, as it sends a clear signal that BSP’s interest expenses, which naturally result from higher policy rates, take a low rank in the hierarchy of the BSP’s policy priorities.

The BSP’s decision to hike the SDA also demonstrated that the below-consensus GDP growth print for the first quarter of 2014 was not going to get in the way of carrying out their price-stability mandate, other pundits say.

While it was important to keep the BSP loss-free and operationally sound, the mandate to keep prices stable throughout the US$250-billion economy always comes out a priority.

Bracing for Tougher Times Ahead

AFTER nearly a decade of a benign uptick, the country’s inflation rate – the cost of buying goods and services — is threatening to disrupt the economy’s growth trajectory. Currently pegged at a year-to-date 3.5 percent, the rate is poised to dangerously breach the central bank’s five percent band limit as prices of basic commodities showed signs of an upward trend. Blame the inflation’s looming downsides on the wave of disastrous events unleashing cost-push pressures on an economy susceptible to price distortions.

By and large, the Moro separatist attacks in Zamboanga city, the destructive 7.2 quake in Bohol and the mind-boggling storm surge in Eastern Visayas had conspired and dented the economy. Admittedly, the fortuitous incidents triggered waves of price elasticity with a seemingly upward bias. Most likely, inflation will soar to five percent by end this year as monetary authorities had earlier projected.

That forecast, however, was anchored on pre-crisis scenarios or at a time the economy was robust. But with the economy under siege by inflationary pressures, monetary authorities are likely to clamp down on money supply – technically referred to as M3 – to rein in any sudden gyration of inflation. This ensues once inflation rate breaks through the five percent threshold level which is very likely, taking into account the new challenges on the ground.

Intervention measures, which can be damaging to the economy in the long run, can range from a hike in interest rates to tightening of overnight lending and borrowing policies. For those in the corporate sector, an economy’s downward spiral could hurt profits and limit stock price appreciation. A regime of high Inflation rate also robs companies of market value since they are forced to raise prices of the goods they sell to recoup investment costs. While they can pass on the costs to the consumers, the goods they sell are in the final reckoning become worthless each day.

Given the economy’s new twists and turns, Bangko Sentral is likely feeling the pressures to revise upward its inflation expectation to factor in a creeping surge in prices. A single percentage rise in inflation can spell a difference between poverty and prosperity.
Lately, inflation – the bane of any economy – was acting up anew as supply bottlenecks erupted in calamity-stricken areas, creating an artificial shortage of basic commodities.

What exacerbated the situation was the massive destruction of farm-to-market roads constricting the extent of the delivery system to where the commodities are critically needed. Based on Department of Agriculture (DA) data, food production areas bore  the brunt of super typhoon Yolanda with damages piling up to nearly P7 billion. Rice fields and fisheries stocks accounted for the biggest losses at P2.23 billion and P1.16 billion, respectively.

Yolanda also took its toll on high-value crops such as coconut, mangoes, cassava, bananas and vegetables. Overall, the DA estimated that the calamity dislocated 214,522 metric tons of goods from 134,085 hectares of farmland. The figures exclude devastated agricultural infrastructure, facilities and equipment for irrigation systems in Eastern Visayas, a key food production basket. Leyte province alone chalked up P2.22 billion in losses, about half of which represents ruined palay.

Amid a grim picture in the agriculture sector, the government’s think tank, the National Economic Development Authority (Neda), is less upbeat about the economy’s growth prospects. In a statement, it predicted that growth of local output – or Gross Domestic Product (GDP) – in this year’s last quarter could be trimmed by 0.3 to 0.8 of a percentage point to 4.1 percent.

Hardly significant, the reduction would nonetheless bring down the government’s GDP target of attaining 6-7 percent GDP growth target by end this year, quite ambitious for an economy weakened by a string of disasters, both man-made and natural. Such bleak outlook, Neda says, could linger through 2014 because of the reduced production capacity in typhoon-affected areas.

What bears watching is the extent of the government’s fiscal spending to mount a multi-billion peso rehabilitation program which can be potentially inflationary. Officials boast that with improved tax revenues, the government has more than enough fiscal space to go on a splurge. Initial estimates placed the rehab cost at P10 billion to defray the costs of repair of infrastructure and other facilities.

In effect, the government has no choice but to part with its revenues which otherwise could have been wasted in the pockets of the notoriously corrupt and the inept. The choice is simple: reconstruct and resuscitate a disaster-ravaged economy or risk prevalence of abject poverty.