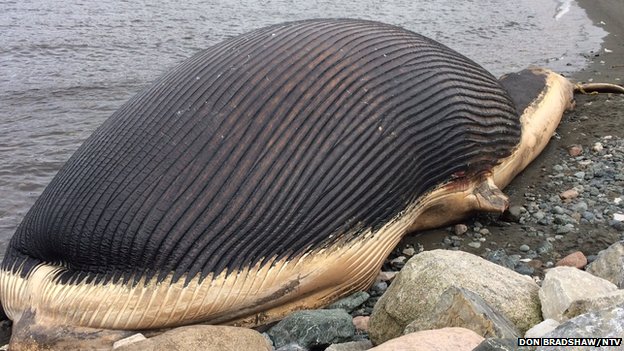 The residents of a town on Canada’s Newfoundland Island fear a blue whale carcass that washed up on its boardwalk last week could explode at any time.

The 25m (81ft) whale on Trout River’s rocky beach is one of several believed to have died in heavy ice weeks ago.

Town Clerk Emily Butler says the body is bloated with methane gas caused by decomposition and will soon reek, regardless of whether it explodes.

Local and federal authorities disagree which are responsible for its disposal.

Ms Butler said the town of 600 people did not have the resources to deal safely with the carcass, though Canadian officials say it is their responsibility.

She told broadcaster NTV that if the town were to push the whale out to sea, it could pose a hazard to passing ships.

The whale appears to have bloated beyond twice its normal size

The town, a tourist destination inside Gros Morne National Park on the Canadian island’s west coast, has seen a new type of visitor since the whale carcass came ashore.

“It’s very difficult to keep people away, simply because it’s not too often that you see a blue whale,” Ms Butler told broadcaster CBC.

Last year a sperm whale carcass that washed up on the Faroe Islands exploded as a biologist attempted to dissect it.