What Is PNoy Up To?

SOMETHING is happening in this nation that is not easy to understand or interpret. Most people are wondering what’s next. Others are also wondering how PNOY sees and/or interprets what is happening. Most of the opinions are not so salutary. 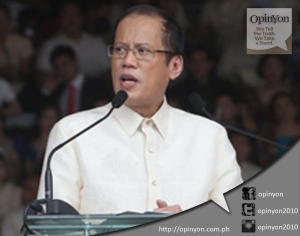 When the protests began about the PDAF and began to reach a crescendo, the evident uncertainty of the Palace was discomforting. First was the kneejerk response of opposing the protest and defending PDAF. Then the position changed to being somewhere in the middle until the day of the protest when a declaration of support for the protest was made obviously to pre-empt the MPM protest march at Luneta.

Obviously, the responses suggested that the assessment was that the protests would somehow go away and that it should not be taken seriously. This was a mistake because what was hurt was PNOY’s own integrity. For someone who had planted on the masthead of his administration the “Matuwid na Daan”, his vacillation about truly pursuing the corruption exposed by the Commission on Audit report was disheartening to many people.
This revelation of such extensive malfeasance in the highest levels of the Legislative bodies and the Executive Departments, after the impeachment through somewhat dubious methods of the Chief Justice, sent tsunami-like waves over the whole nation. The ones who impeached Corona were guilty of even greater corruption! Proof once and for all that, with few exceptions, corrupt and dishonorable persons in just about every part of government are totally undeserving of any honor and have tainted so severely their positions. No delicadeza and they are still clinging to their posts, shameless if anything.

Remedial action was undertaken to try and pacify the protesters by inviting the somewhat motley leaders to a conference with the DBM head Butch Aquino and DSWD Sec. Soliman and a few others. It did not result in any real changes as was proven subsequently.

The people’s demands were essentially two. First, abolish the PDAF in both houses of Congress, meaning take away from them the power to initiate and control projects, their function being legislating. They are welcome to make suggestions, but cannot initiate projects on their own initiative. That work should be undertaken by the line departments and agencies with no overt or discreet interference.

Of course what resulted in the budgetary process was to simply change the collar around the pork but the initiative still rests with the individual legislator. In other words, sheer cosmetics, not substantive.
The second portion of the protesters demands was to charge everyone involved in the corruption, regardless of party affiliation. The report of the Commission on Audit indicated that over 200 legislators were somehow involved in the matter, some already out of Congress, many others still in. Well, up to now the charges have not been filed and it seems only three are being seriously considered at this time. The sad part is that legislators on both sides of the aisle are involved but PNoy is being true to his pursuit of only those that may represent a danger to him or else those that are in the opposition. So the protesters have given PNoy until sometime early December to file all the charges and otherwise prove that he is just like the other politicians and cannot stand on his declared slogan. He has been found seriously wanting. He may have a heart for the poor but all calculated for political gain.

I am not betting that with the exception of a very few samples, the others will be indicted at all. Again, it will be at the expense of PNoy’s integrity and commitment to doing the right thing! I suspect though that in formulating that slogan the ones who crafted his political postures never anticipated that all these revelations of corruption would ever be so public.

Next followed the Zamboanga incident and there are those that saw what happened as suspiciously orchestrated. Followed by PNoy’s physically staying in Zamboanga for a week, utterly neglecting all the other national concerns. Some interpret this as a somewhat escapist activity. Next came the earthquake in Bohol and so now PNoy is camping out in the area. This leaves a lot of people wondering that though the moves might have had some PR value, it did expose PNoy to accusations of limited capacity to undertake the stresses of office and face the very serious issues that need to be faced. So much for the people being the boss. Turns out to be sheer political blather.
These developments though smack of a very cynical sort of perception management considering the damage done to PNoy’s image by his waffling on the PDAF issue; protesters incidentally wanted the elimination of discretionary spending to be applied to what is tantamount to his own pork, a large percentage of the national budget at about 600 Billion of a 2 trillion budget, approved by a compliant Congress in 15 minutes as the media have reported.

Well, maybe not totally, but certainly much , much less than the current amount; the idea being let the amounts be allocated directly to the line departments who must give good account of how they spend it.
And so, PNoy’s principal slogans lie in tatters.

Well, I think it was naively undertaken and has proven virtually impossible to truly pursue. But it does raise issues about what is next. If the protests continue or if PNoy truly pursues the issue of corruption in the PDAF, he will have to deal as well with the claimed corruption in Malampaya funds, the Agriculture scam and a whole lot of others that have come to light.

Then, there is the corruption in many LGU units all the way down to the Barangay level. As I have commented before, we will probably need to enlarge our jails and holding places or else create a bonanza for hospitals as the favorite holding area of those who have some influence in this nation.

But this is not really the danger. If PNoy is pushed hard to the wall, what direction will he then take? We need the seers to come out and tell us what they see coming up next because I do not see the pressures abating.

The Unconstitutional PDAF « OpinYon - The Philippines' first and only weekly opinion paper. said:
December 13, 2013 at 9:03 pm